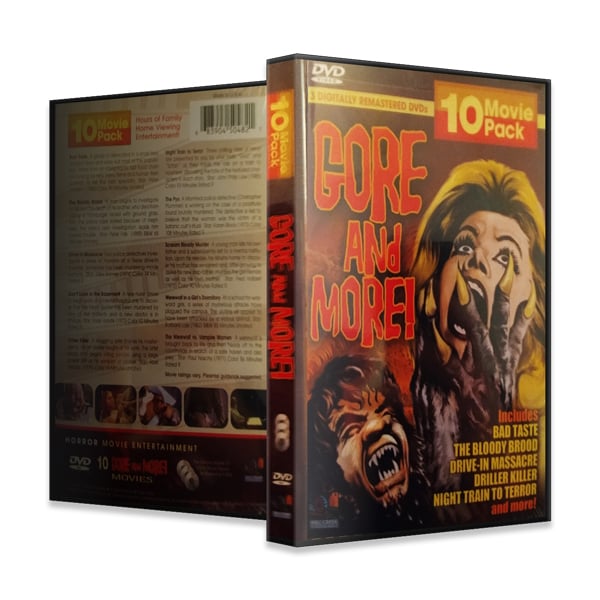 Bad Taste
A group of aliens land in a small New Zealand town and wipe out most of the population. Aliens from an intergalatic fast food chain are looking for new menu items and human flesh appears to be the next specialty. Star. Peter Jackson. (1988) Color 90 Minutes. Unrated.

The Bloody Brood
A man begins to investigate on his own the death of his brother, who died from eating a hamburger laced with ground glass. With the police case stalled because of ineptness, the man's own investigation leads him toward trouble. Star. Peter Falk (1959) B&W 65 Minutes. Unrated.

Don't Look in the Basement
A new nurse arrives to begin work at a mental hospital only to discover that the head doctor has been murdered by one of the patients and a new doctor is in charge. Star. Rosie Holotik (1973) Color 92 Minutes. Rated R.

Three chilling stories of murder are presented to you by your hosts "God" and "Satan" as they travel the rails on a train to nowhere discussing the fate of the featured acters in each story. Star. John Philip Law (1986) Color 93 Minutes. Rated R.

The Pyx
A montreal police detective (Christopher Plummer) is working on the case of a prostitute found brutally murdered. The detective is led to believe that the owmen was the victim of a Satanic cult's ritual. Star. Karen Black (1973) Color 108 Minutes. Rated R.

Scream Bloody Murder
A yound man kills his own father and is subsequently sent to a mental institution. Upon his release, he returns home to discover his mother has remarried and, after gorwing to dislike his new step-father, murders the gentleman as well as his own mother. Star. Fred Halbert (1975) Color 90 Minutes. Rated R.

Werewold in a Girl's Dormitory
At a school for wayward girls, a series of mysterious attackes have plagued the campus. The victims all appear to have been attached by a vicious animal. Star. Barabara Lass (1962) B&W 83 Minutes. Unrated.

The Werewolf vs. Vampire Women
A werewolf is brought bacck to life and then heads off to the countryside in search of a safe haven and also prey. Star. Paul Naschy (1971) Color 86 Minutes. Rated R.